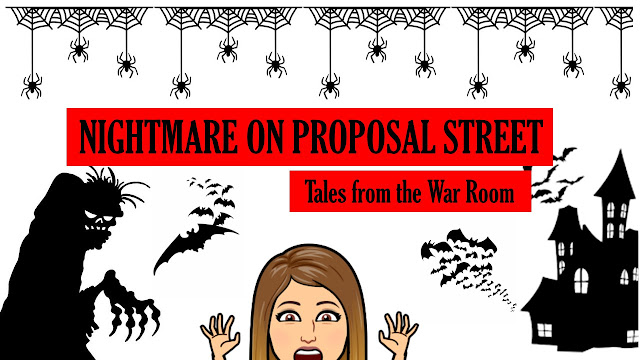 Proposal horror stories: for many of us, they have left deep scars, driving contingency plans and schedule buffers that often frustrate our teams. When developing our proposal schedules, APMP advises us to build in 10 percent of our proposal development time to plan for unexpected events. But until you’ve been the one stuffing binders in the back of an SUV, illegally speeding down a shoulder during bumper-to-bumper traffic, you’ll never truly understand the importance of these planning measures. And if you’ve ever taken these extreme measures only to still miss your proposal delivery—I know you understand the importance of planning even more deeply than those of us who have not!

In honor of the upcoming Halloween festivities, I thought I would share one of my favorite proposal horror stories.

Murphy’s Law
A few years ago, I worked on one of those proposals where if something could go wrong, it went wrong. By this time in my career, however, I had already witnessed several proposal nightmares, so I had several buffers baked into my schedule. But all the contingency plans in the world couldn’t prepare me for what we’d experience on this proposal.

Everything had started out fairly standard on this proposal (for that particular company). It was one of those efforts that was handed to the Capture Manager in the final hour, so we had very little time to prepare. We worked with the Account Manager to understand the strategy and come up with a solution before the kickoff. I developed the proposal schedule, the outline, and the templates—and then we gathered our writing team and Subject Matter Expert (SME), and we set out to write our proposal.

About a week in, right after the Pink Team, the head of business development tells us she needs to take our past performance and resume writer so he can support another proposal effort. Great. We have time, so I guess I can take over the writing for those sections. This is one of those proposals where we don’t actually have any real relevant past performance, so the writing is really fun—but we hang in there and make it work.

Fast forward to the days following the Red Team—we’re finalizing the proposal in preparation for Gold Team. Everything is looking good. But one morning I walk into the office and the Capture Manager pulls me aside. He’s acting kind of weird, and finally it comes out, “Don’t say anything to anyone, because it’s not public yet, but our SME—our bid Program Manager (PM)—he’s being indicted for fraud.” I stare at him, waiting for a smile, anything to indicate that he’s joking. He’s got to be joking. But that smile, that comical laugh—it never comes.

With less than a week to final delivery, we play the key personnel scramble. We get our Deputy PM (DPM) to sign as the PM, reach out to our backup DPM candidate and get him to sign for the DPM slot. We rework the original DPM’s resume to show his qualifications as the PM—get the new DPM’s resume into the template and work in the necessary proposal details and metrics. We scour the technical and management volumes to swap out the names and qualifications for those of the adjusted leadership team. We update the organization charts and other relevant graphics. We pray we haven’t missed anything.

There’s no doubt about it. That proposal was all that proposal nightmares are made of. But because we planned for contingencies, we were still able to pull off a fairly smooth, on-time proposal delivery. And we went on to win that nightmare proposal—so at least there was a silver lining among all of the chaos.

Final Thoughts
We all love a good proposal horror story. Proposal horror stories provide for great shock factor and comic relief, at least after the initial wounds have healed and the scars have faded. But our war stories also remind us why planning is so important and help us to justify our schedule contingencies, even when our teams push back on us hard. Stressful proposal submissions are just not worth it, especially when they can so easily be prevented. This Halloween, I encourage you to embrace your Nightmares on Proposal Street as you develop your proposal schedules and work in the necessary contingencies. Cheers!