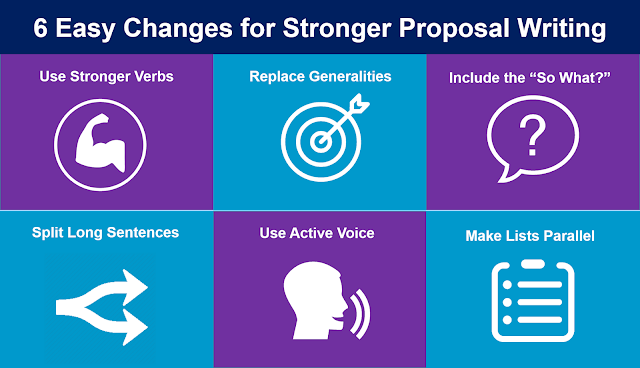 When writing proposals, one major challenge we face is generating strong, clear, and compelling text. It’s one thing to have a grammatically correct proposal, it’s another to have a proposal that actually reads well. Sometimes we have been looking at the words so long that we lose sight of some of the easy ways that we can make our writing stronger. In this week’s article, I present six easy ways to strengthen your proposal text.

1. Use strong verbs
One of the easiest ways to strengthen your writing is to express actions in verbs. To do this, it is critical to avoid nominalizations. Nominalizations are actions expressed in nouns rather than verbs. Examples include failure, investigation, movement, reaction, and refusal. Replacing weak verbs and nominalizations with strong verbs will make your sentences more dynamic, direct, clear, and concise.

2. Replace generalities with specifics
Another easy way to strengthen your text is to replace generalities (e.g., a lot, extensive, very, really) with quantified specifics. As an example, if the identified benefit of your COTS solution is, “saves the Government time and money,” you might be able to quantify that benefit as, “life-cycle savings of $250,000 in software development costs.” However, be careful not to be too specific: 20% will be perceived with more confidence than 22.4%, which may raise questions of validity. Adding this specificity will make your proposal writing more credible and compelling.

3. Include the “so what?”
A third easy way to strengthen your writing is to articulate the customer benefits consistently. Articulating the customer benefits is critical not only in feature and benefit tables, but throughout the document narrative as well. Remember, these benefits should be things that are important to the customer—typically reduced cost, reduced risk, increased quality, increased efficiency, increased effectiveness, or expedited timeline (faster). However, we often leave these benefits implied rather than stated. When articulating benefits, always answer the question, “So what does that mean?”

4. Split long sentences
A fourth way to strengthen your proposal writing is to avoid cramming two or three main ideas into one long sentence. This can lead to long, drawn-out sentences and disjointed writing. It will also cause your message to lose focus. When you see a long, complex sentence in your section, first identify your main points. Then break the sentence into smaller sentences. To do this may require some rewording. See the example below.

Final Thoughts
Especially when we are juggling multiple proposals at once, a major challenge we face is generating strong, clear, and compelling text. Sometimes we have been looking at the text so long that we lose sight of some of the easy ways that we can make our writing stronger. Though this isn’t a comprehensive list by any means, remember that some easy ways to strengthen your proposal writing include using strong words, replacing generalities with specifics, including the “so what,” using active voice, and applying parallel construction.